This morning I had a situation that prompted writing this particular post.  I want anyone who is NOT a rideshare driver, to understand, we are not out here picking up strangers because we have nothing else better to do!

So here’s how my morning started:

I was starting a $15 streak bonus (3 trips in a row) just before it ended at 5AM on Lyft and arrived at the rider’s pick up location to find him outside pacing.  He got in the car talking to someone on speaker. As I am confirming the destination address  shown in the app, I realize immediately that I am going to be listening to the conversation between a panicked, out of breath female voice, and the rider trying to get her to “just breathe.”   He keeps repeating that, and reassuring her that “he’s on the way” and will take her to the hospital.

A few minutes into the trip, he says he needs to change the destination address but wasn’t able to do it in the app.  He claims he’ll pay me $100 cash if I take him to the address where this female is supposedly at.  The original destination was his home.

I wasn’t happy about this for a few reasons:

1. I wasn’t trying to hear that the destination could not be updated;

2. I’m not one to be involved in other people’s emergencies; and

3. Cancelling the trip meant I wasn’t going to earn the $15 streak bonus.

However, I am a driver who does not believe in leaving people stranded, so I canceled the Lyft trip and changed Waze to the address he gave me to get this woman who I could hear was obviously in distress by  continuously hyperventilating, while apparently not listening to the rider trying to calm her down.

At some point during this 30 minute trip, the rider tells me the emergency is that she had been raped.  He doesn’t give a lot of details, but does tell me about what he was doing before I had picked him up.  And he had been outside in the cold for an hour because three other drivers had canceled on him.

During most of the ride, he kept telling her he was on his way, and would take her to the hospital, but she apparently wasn’t listening, as she just kept crying and saying she couldn’t breathe.

It was all I could do to keep driving while keeping my mouth shut.   I had SO many questions!

As we got close to the destination, I didn’t hear either of them talking, so I asked about the CashApp he said he would do.  He gave me some story that didn’t sound legit, and I was trying my best to keep from feeling like I was being suckered for a free ride.

It turned out, he DID tip me $20 in the Lyft app (which I didn’t see until I checked for it).  I had only seen that instead of the original $7.98 I was supposed to be paid for the trip had it been completed, I was paid $3.75.  I wouldn’t have known about the tip until later, if he had not told me he did it.

Cool, the trip was financially worth it — $23.75.  However, I’m not holding my breath for the balance of the $100 he said he’d pay my through CashApp.

The reason I decided to write this particular post is because there are things riders have NO clue about and someone needs to tell it!

Drivers don’t believe you and Uber and Lyft both cap the amount of the tip.

Today was the first time someone in my car told me that they tried to tip me the entire $100 in the Lyft app, but was only allowed to tip $20.

SERIOUSLY?  WHY are these apps capping how much a rider can leave as a tip?  What is the point of that?

2.  If you decide to tip your driver, do it in cash or through some platform like CashApp.

I gave that rider my CashApp ID – $NetLady (anyone is welcome to use it at any time and Thank You! :))

3.  We are not medical professionals and do not like being used to handle medical emergencies.  That is what 911 is for.

Now this rider had in his head that once at the destination he gave me, he was going to pick this female up and take her to the hospital.  In MY car?!  In what I imagine to be a hysterical condition?  Naw, I wasn’t feeling that AT ALL!

I had already suggested shortly before we arrived that he call the fire department to help her since they have medical first responders who can check on her and transport her to a hospital.  Once we arrived, he said she had apparently fallen asleep and he was having trouble getting her to wake up.

I told him to call 911 because neither one of us were equipped to handle what help she may have needed.  I was finally able to leave and went back home to regroup and write this blog post.

Other MAJOR things riders do not seem to know, or choose to totally ignore

In fact, drivers can be deactivated (car removed from the app platform so there is no access to drive) for any number of vague reasons, and there is rarely provable evidence of misconduct AND there is NO appeal for the deactivation decision.

I had a hard time believing riders are lying to to get free rides, but that is something that drivers know because both Uber and Lyft are aware of the pervasive problem, but not doing anything to correct it.  Check out my own recent experience, which happened at the end of January 2023.

So, whenever a driver does allow a child, who should be in a car seat, to ride without one, that driver is assuming risk that they did not sign up for.  Do not be mad, or feel some kind of way, when drivers cancel because there is no car seat.  Not only is it Georgia law, drivers are not interested in assuming parental responsibility for a rider’s child who should have been in a car seat.  If anything were to happen, that driver will be held liable while the adult rider will more than likely escape being held responsible.

There is certainly more I could write about, but it’s time to get back out there and drive for a bit.

If you do not already have a referral code, feel free to use mine:  AN24E

And Stay Tuned for the Upcoming Interview with HERide Founder, Jillian Anderson

NOTE:  YOU Do NOT Need To Be a Rider or Driver to help support the movement for a BETTER rideshare experience. Just share this site with others!

Thanks SO much for taking time to visit.

PLEASE freely share this information with your rideshare friends and family!

It’s that simple and would be so appreciated.

You have NO idea who YOU know that needs this information. 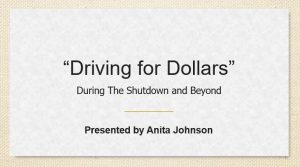